Patron saint of the Police Union of Croatia - Saint Bartholomew 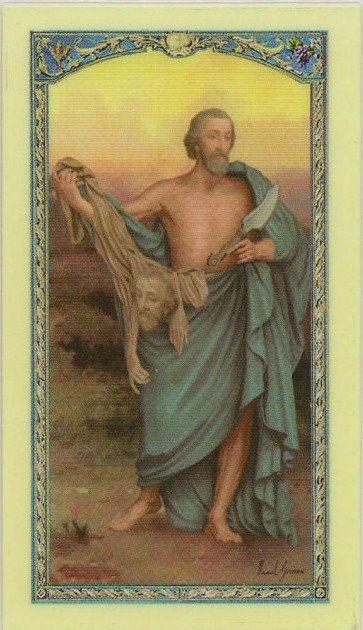 In the lists of saints-apostles there is mention of St. Bartholomew. He is mentioned in the Gospels According to Matthew, Mark and Luke as well as the Acts of the Apostles. His name comes from "Bar Talmai", meaning "son of Talmai". In Latin it was Bartholomaeus, which became Bartolomej and Bartol in Croatian.

John the Baptist, describing a testimony of the first followers, recounts an interesting meeting between Philip and Nathaniel, and subsequently Jesus and Nathaniel. Here it is:

"Philip found Nathanael, and said to him: 'We have found him of whom Moses wrote about in the Law, and the Prophets - Jesus, the son of Joseph from Nazareth.'

-'Can anything good come out of Nazareth?', Nathanael asked.

Jesus saw Nathanael coming to him, and said of him: 'Behold, an Israelite indeed, in whom there is no guile.'

Nathanael said to him: 'How do you know me?'

Jesus answered him: 'Before Philip called you, when you were under the fig tree, I saw you.'

Then Nathanael declared 'Rabbi, you are the Son of God! You are the King of Israel!"

Jesus answered him: 'Because I told you, 'I saw you underneath the fig tree,' do you believe? You will see greater things than these!' And he says to him, Verily, verily, I say to you, Henceforth ye shall see the heaven opened, and the angels of God ascending and descending on the Son of man."
(John 1:45-51 NIV)

Interpreters of the Scripture are not completely certain if this Nathanael is the same as Bartholomew. Most arguments are in favour of it being one and the same person. Nathanael would in this case be the apostle's first name, and Bartholomew the equivalent of a modern-day family name. Although in antiquity people, Jews in particular, did not have last names in our modern sense of the word, one person often bore two names. This means Nathanael and Bartholomew can be two names for the same person.

Bartholomew was born in Cana of Galilee, where today a church with his name lets his memory live on. After initial hesitation, Nathanael became Jesus' follower and apostle. This hesitation should not come as too much of a surprise because at the time there were false prophets going around Palestine, pointing to themselves and pretending to be Messiah's harbingers, but were mere quacks. That is why a serious and level-headed Israelite could not acknowledge just anyone to be the Messiah. But once he was convinced Jesus was the Messiah, he joined him and followed him. Jesus praised him as "a true Israelite without any guile" the first time he met him, which means a simple, honest, well-meaning and truthful man.

After the Holy Ghost descended upon the apostles, Bartholomew, too, became a missionary. Later accounts tell of his long missionary journeys, all the way to India, but these cannot be confirmed. But the accounts do make it quite certain that Bartholomew was a very active and busy apostle, which is quite understandable. Blessed with the power of the Holy Spirit, he went on to announce the Good News, dedicating his whole life's work to it, and finally dying a martyr's death.

According to the Apocrypha, Bartholomew preached the Gospel first in India, then Armenia, where he was brutally tortured. They peeled off his skin and chopped off his head. This horrible martyrdom was immortalized at the Sistine Chapel by Michelangelo, who painted St. Bartholomew holding his skin in his hand in his masterpiece The Last Judgement. On the skin, the artist painted his own portrait. The relicts of St. Bartholomew were transferred west in the 6th century, first to the Island of Lipari in the Tyrrhenian Sea and then to the town of Benevent. They did not remain there permanently either because in 983 A.D. emperor Otto III got hold of them and had them transferred to Rome, where they were laid down in St. Bartholomew's Church on a tiny island in the river Tiber. This island had already contained a renowned shrine as early as in ancient Roman times, built to honour Asclepius, the Greek god of doctors and medicine. It was replaced by the oratory of St. Bartholomew. Christian believers would pray to Bartholomew in sickness, especially if the experienced cramps of different kinds, skin and nerve diseases. Leather craftsmen, tanners and curriers, would also invoke him as their protector, as well as farmers and shepherds.